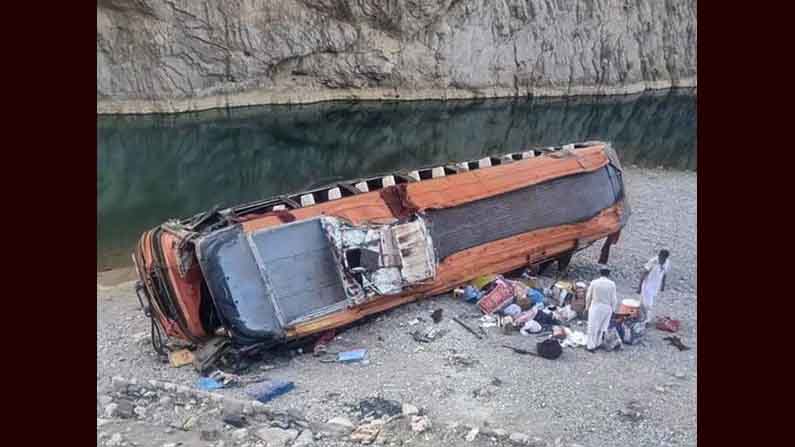 By our Staff Reporter

Khuzdar: Twenty pilgrims were killed in a road accident in Khuzdar district of Baluchistan province on Friday as an over-crowded passenger bus fell into a deep gorge.

Fifty pilgrims were also injured and rushed to hospital.

Majority of the deaths were reported of passengers sitting on the roof. According to police, the caravan was on the way to Johi Dadu after attending the Kakahi Heer Jalsa. While authorities ordered investigation to know cause of death, passengers told police that the accident occurred due to negligence of bus driver who continued driving despite the fact that the bus had developed fault in breaking system.

” We are investigating the circumstance which might have lead to horrible accident. the driver, identified as Wazir Muhammad has died on the spot. A few of passengers claimed that brakes of the bus failed near Katehra, after which a passenger, identified as Sarfaraz, asked the driver to let them off the vehicle. However, driver didn’t listen to him. Thus, near Gojra bridge, the bus swerved and fell into the river,” An investigation officer told Correspondent of Islamabad Telegraph.

The deputy commissioner Khuzdar, assistant commissioners along with the Balochistan Levies reached the spot and rescued the victims. Frontier Corps also participated in the rescue operation.

The injured along with the bodies of the victims were shifted to the Khuzdar District Hospital.

Eight people, including an infant, lost their lives when a passenger bus PLUNGED into Siran River near Gojra Bridge.

Residents reached the site and shifted the deceased and injured to a nearby hospital. After completion of all legal formalities, Phalra police sent the bodies to their respective hometowns. Rescue officials said that the deceased hailed from Nara Doga, Lassan Thakral and Battangi areas.